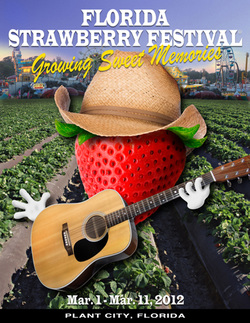 Each spring, the Florida Strawberry Festival® rolls out the red carpet to welcome visitors from throughout the Sunshine State and the world. Guests come from near and far to enjoy exhibits of agriculture, commerce, industry, livestock, fine arts, horticulture, and crafts. The fabric of American life is woven into the Festival through social events, contests, youth developmental programs, top-name entertainment, and parades with glorious floats and high-stepping marching bands.

​For all the headline concerts on the Wish Farms Soundstage — which take place at 3:30 p.m. and 7:30 p.m. each day — there are about 3,000 free seats available for all shows in the Morrow Steel Free Grandstand. Those seats are filled on a first-come, first-seated basis as part of your paid gate admission. Reserve seat tickets are available for $15 and up (varies by show), while supplies last.
Click on Artist's name to jump to that album, or scroll down to view all.
Jake Owen was born in Winter Haven, FL, but was raised on the east coast of Florida in Vero Beach.  So, this was a homecoming of sorts for Jake and his fans.

In 2005, Jake went from performing in Florida bars to moving to Nashville and within months he had a Music Row song-publishing contract. Less than a year later, he was signed by RCA Records and was on the charts with his first two singles, “Yee Haw” and “Startin’ with Me.” He went on the road with Kenny Chesney and then Brad Paisley. Owen scored his third hit, 2007’s “Something About a Woman.” In 2008, Owen opened shows for Sugarland and in 2011 went on tour with Keith Urban on the Get Closer 2011 World tour.

In September 2011, Owen achieved his first number one hit on the country charts with the title track to his third album "Barefoot Blue jean Night", as did his current single "Alone with You".
Rodney Atkins was born in East Tennessee where he was put up for adoption. He always finds time to give back to the Holston Methodist Home for Children in Greeneville, TN, from which he was adopted.

His first studio album "Honesty" was released in October, 2003 and produced the top 5 single "Honesty (Write me a List)". In 2006, he release "If You're Going thru Hell" which has been certified Platinum. This album put him on the country map with 4 straight #1 singles: "If You're Going thru Hell", "Watching You", "These Are My People" and "Cleaning this Gun". His 3rd studio album "It's America" produced another number 1 by the same name.